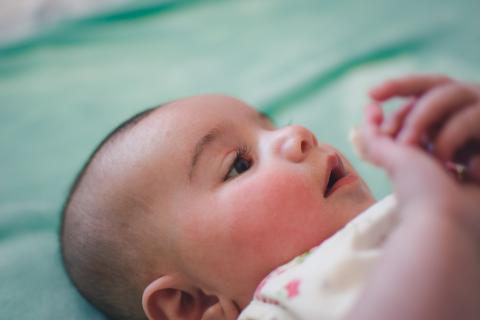 Findings from the Melbourne Genomics Congenital Deafness Clinical Flagship have been published in two notable peer-reviewed journals. One of 16 clinical projects, the Deafness Flagship investigated the impact of genomic testing on the care of babies born with hearing loss.

Identifying the cause of hearing loss can change medical management and result in more precise and personalised care. The project team – led by Professor David Amor, with key coordination from Dr Lilian Downie – found genomic testing tripled the number of families who could be given a reason for their baby’s deafness.

The European Journal of Human Genetics publication details how 56% of families were able to gain a genetic diagnosis for their child’s hearing loss through genomic sequencing — compared to just 21% through usual testing. Melbourne Genomics’ Dr Lilian Downie said genomic testing offered a range of benefits.

“With genomics, we are able to tell many more families why they have a child with hearing issues,” Dr Downie said. “Doctors and the family can then create a tailored care plan. We found that 92% of the diagnosed babies had a change in their care – despite the fact that their underlying condition cannot be cured.”

The Clinical Flagship team also ran a sub-project investigating genomic newborn screening for a range of childhood-onset conditions other than deafness. Known as the ‘Baby Beyond Hearing’ project, this study is the first of its kind in a population-based cohort: offering genomic testing to all children with moderate to severe hearing impairment born in Victoria between January 2016 and December 2017.

More than two-thirds (68%) of parents who consented to genomic testing for their infant’s hearing loss also accepted the offer of additional screening of the child’s genome for a range of other conditions (which affect children but are unrelated to deafness).

The resulting peer-reviewed publication in Genetics in Medicine explores the real-world (not hypothetical) choices parents made when offered newborn genomic screening, as well as the psychosocial impact of these choices.

The 106 children in the Congenital Deafness Clinical Flagship are patients of Austin Health, Monash Health or The Royal Children’s Hospital, and were aged between four weeks and one year at the time of the study. They are among more than 3,800 adult and paediatric patients who have received genomic testing through Melbourne Genomics.