Home  »  Melbourne Genomics in the media

Melbourne Genomics in the media 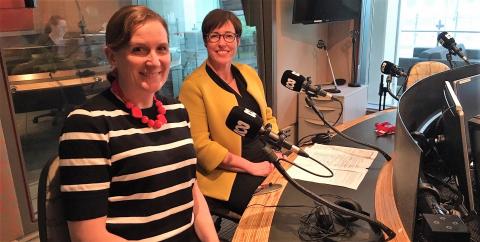 Melbourne Genomics featured recently in four media stories, in the lead-up to and during our symposium and free public forum events during November

Patient Michael Wright spoke to Channel 7 News about his cancer and how genomics impacted on his diagnosis and treatment. Patient Bree Faulkner, who has genetic kidney disease, was interviewed by the Herald Sun about having a baby after genomic sequencing gave her more information about her condition, while Executive Director Professor Clara Gaff provided a summary of our current program.

Listen to the Triple R interview

ABC Radio National Drive with Patricia Karvelas spoke to (pictured, left to right) Jillian Hastings Ward and Melbourne Genomics’ Executive Director, Professor Clara Gaff, on 14 November about the current state of genomics in healthcare and how testing could be made more widely available.

You can also view videos created by Melbourne Genomics of Michael and Bree telling their stories.

The public forum, ‘How DNA testing is transforming your healthcare’, held on 14 November, will be broadcast on ABC Radio National’s Big Ideas program with Paul Barclay early in the new year.