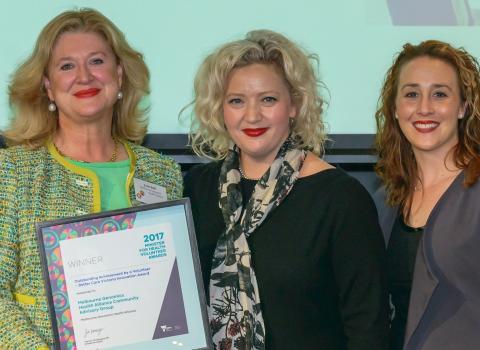 The Melbourne Genomics Community Advisory Group has been announced winner of the ‘Outstanding Achievement by a Volunteer – Better Care Victoria Innovation Award’ in the 2017 Minister for Health Volunteer Awards.

The award recognises the group's innovation in bringing community views and advice to the implementation of genomics in healthcare. "The Community Advisory Group has led the way in ensuring community perspectives inform the implementation of genomics into healthcare – resulting in better care for patients. A pioneer in its field, nationally and internationally, the group has created a model and framework for community involvement in the genomic medicine era," notes the award citation.

Established in January 2014 within weeks of the Alliance’s founding, the Community Advisory Group is one of the world's first community-based groups to advise a major clinical implementation initiative in genomics. The group's members are very active community and patient advocates nominated from among the ten members of the Melbourne Genomics Health Alliance. It is a patient-connected, grassroots group of individual members, each nominated for their networks, knowledge and skills.

To date, the group's work has: